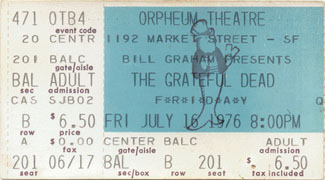 This piece of music is one to behold. Amazing interplay and jazzy fusion mark a departure from the 1974 structured outro jams that were legendary. By July of 76 the band had really started to gel again with two drummers manning the rhythm section. Prior to Eyes, this show contains a legendary Comes a Time with a spectacular jazzy jam that seems to go on for 10 minutes until it unwinds into a great Other One, which itself melts away into a brief space and then into Eyes. Once the main part of Eyes ends the band almost immediately transitions from E Major into an Eminor jam led by a cool little lick pounded home endlessly by Keith and Phil. This keeps the focus tightly around this center core of Jam, Jerry eventually turns on the Octaver around the 4 minute mark and the song fades away from the minor into some leading notes from Goin down the road before re-centering around the main theme of the jam. Eventually this bleeds nicely Back into the Other One for Verse 2. WOW. Wish I was at this one.

NEW SINGLE – Light of the Moon